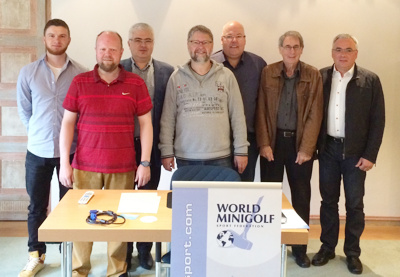 Enclosed are the highlights of the more than 20 different topics discussed during the three-day WMF Board Meeting in Munich, Germany. These highlights include competition plans, relations with SportAccord, WMF financials and other discussions.

The World Adventure Golf Masters 2016 is awarded to Prishtina (Kosovo).

Dr. Gerhard Zimmermann, WMF President, informed the Board about his latest meetings with SportAccord President Marius Vizer. The positive outcomes from these meetings promise closer cooperation in a number of areas; this includes actively helping the WMF in its development by growing and increasing membership on several continents. Related discussions at the WMF Board Meeting included:

The financial report for 2014 and forecast for 2016-2017 were reviewed. Agreement on assignment of marketing/media rights and income split between WMF and EMF was signed at the Board Meeting.

Other discussions included motions for rulebook changes, membership expansion and anti-doping issues. Jon Drexler (USA) was elected into the WMF Media & Marketing Committee. Preparation for the next Delegates´ Conference, which will take place in Lahti on August 16th, was also discussed.

The next WMF Board Meeting is scheduled for August 15th, 2015 in Lahti.

Full minutes of the WMF Board Meeting will follow in the next few weeks.