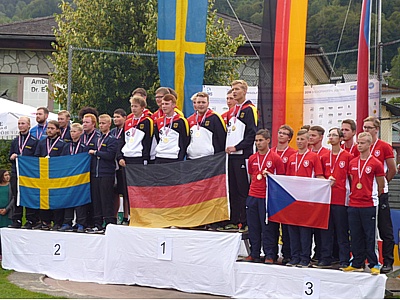 In the female youth category the competition wasn't much tighter as the German girls, with the help of the only 19 in 8 rounds on the female side, took first place over Sweden, who stayed ahead of Russia who took the bronze in this division.

The individual championships told a different story after 12 rounds of 18 holes each as the Czech Republic players showed their strengths, but the German youth still found many places on the podium. In the female youth, Alena Doleželová of the Czech Republic took the stroke-play championship over German Sarah Schumacher by four strokes, despite Sarah posting the only female 19 of the stroke-play rounds. When it came time for match-play on 4th day of competition, the results were flip-flopped. Schumacher easily handled most of her matches, finishing with a victory over Jasmin Hansson of Sweden and Alena Doleželová finished in the bronze position. Michaela Swirlein of Germany finished third in the stroke-play competition.

On the male youth side, Ondřej Škaloud left no doubt as to who the best male youth miniature golfer in the world was, but the road to that title wasn't easy. The stroke-play side was tight as only 2 separated first through fifth place but Škaloud beat out James Lindström of Sweden for the top spot in 'sudden death' playoff. On the match-play side, many of the matches were close but this time Škaloud clipped Benedikt Schwickert of Germany in the final game for the championship. Manuel Szablikowski of Germany finished 3rd in both competitions. Martin Tomanek, WMF Youth Officer and Tournament director had this to say about Ondřej Škaloud, "He is arguably the most devoted minigolf player I have ever met….he definitely deserves the immense success he achieved in Bischofshofen." He also notes that "He is a boy of very good nature - very friendly, he never loses his good mood and he is a good teammate, too."

In other statistics, Germany dominated the most aces in a row category during stroke-play with both their male and female youth contributing as Michaela Zwirlein took the top spot and Ole Riewe following one behind in second.

The tournament organizers should also be applauded for dealing with the adverse weather conditions and ensuring that all 12 rounds were played during the tournament.