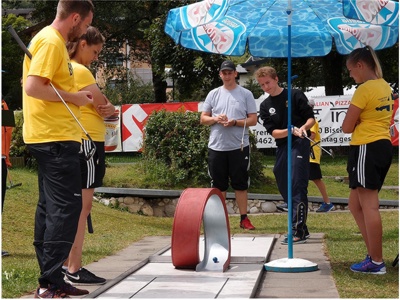 Four rounds of competition are scheduled for the first day, alternating between the two courses, and the team competition will wrap up on August 11 with four more rounds. On August 12 the individual stroke play championships will conclude and set the table for the top males and females to finish the weekend with the match play championships on August 13. A big question will be how the weather impacts play as it did with the U23 Nations Cup and there is rain in the forecast.

Pat Sheridan
WMF Sport For All Committee
Editor-in-Chief, Minigolfnews.com
Evgeny Kaplun
WMF Media Manager
This email address is being protected from spambots. You need JavaScript enabled to view it.