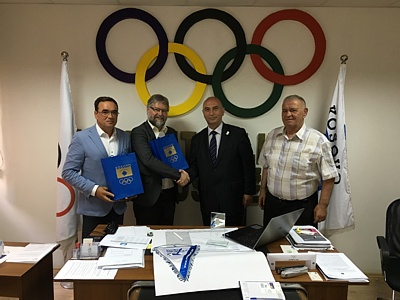 Last year the IOC-President Dr. Thomas Bach visited Kosovo to award IOC-recognition to the National Olympic Committee of Kosovo. Therefore Mr. Hasani understands what it means to fight for IOC recognition, which is something the WMF is doing in 2016. Mr. Hasani and Dr. Zimmermann will meet each other again during the Olympic Games 2016 in Rio this summer.

On behalf of the WMF and the EMF Mr Zimmermann and Mr Condeco expressed their gratitude for the huge support of the Federata e Minigolfit e Kosovës (Kosovo Minigolf Federation) for organising the World Adventure Golf Masters 2016 in Kosovo.

The 2016 WMF World Adventure Golf Masters is the largest staging of the event in its six year history. The tournament will see 62 players and 11 teams from 15 countries play at the Kosovo Adventure Golf course in Pristina on the 25th and 26th June, with titles contested in individual and team categories. Kosovo has been a long-time participant in the tournament, making their international minigolf debut at the inaugural event held in Hastings, England.

The WMF is a member of AIMS – the Alliance of Independent Recognised Members of Sport. Founded in 2009 by 21 non-IOC recognised members of SportAccord it's the fourth group in SportAccord alongside ARISF, ASOIF and AIOWF. The purpose of AIMS is to strengthen each individual sport, combine expertise, share knowledge and maintain close cooperation with the International Olympic Committee (IOC), so that the individual sport will achieve official recognition from the IOC. Dr Gerhard Zimmermann is the Secretary General of AIMS.

In April this year AIMS signed a historic Memorandum of Understanding with the International Olympic Committee. AIMS proudly supports and promotes the vision and mission of the Olympic movement by sustaining and developing sports.

The World Minigolf Sport Federation (WMF) is the umbrella organisation of 57 Minigolf sports associations worldwide with continental associations in Africa, America, Asia, Europe and Oceania. There are more than 38,000 competitive minigolf players registered with the WMF via the 57 member nations, with 900-plus clubs between them. Over 1,000 courses are approved for official competitions and around 1,500 minigolf tournaments held each year.

Several members of the WMF contributed to this release.